Skip to content
by Charlie Feldman
I recently went on a spiritual pilgrimage to India, which was the first trip for which I have needed a passport in 42 years. I went with Ramkrishna Chatterjee, whose parents have a home in Belur. He and his family were very generous with their time, showing me holy sites and even staying at Jayrambati and Kamarpukur, where all four of us traveled together.
Of the sites I saw, Sri Ramakrishna’s room at Dakshineshwar was the highlight of my trip. I was actually sitting in the same room where Thakur spoke with his disciples! I also made a wish when we saw the Kalpataru tree at the Cossipore garden house. At Belur Math, I liked to go sit in Sri Sarada Devi’s room at the old Math, where people could meditate for a while. Unlike the main temple, there were usually only one or two other people there, and the sounds of the birds would accompany my meditation.
At the International Guest House at Belur Math, I met people from South Africa, Japan, the Netherlands, London, Vancouver, Boston, California, and more, showing that this really is an international movement. The main temple at Belur Math always had droves of people coming in and out to give their pranams. 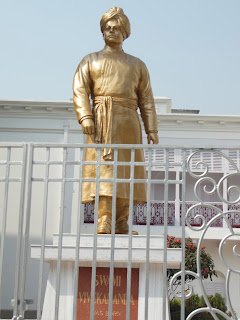 The brahmacharis at Belur Math sang arati with their beautiful voices. At the Vivekananda Birth Anniversary Celebration, there must have been about 2,000 people present. There were musicians and speakers, including Swami Baneshananda from Germany, who spoke in English. He said that religion thrives in India due to religious freedom, and that while reason can be contradicted by higher reason, and scriptures can be contradicted by higher scriptures, nothing can contradict God-realization.

My two secular goals for my trip were not to get diarrhea and not to get my shoes stolen when I went into a temple, and I was successful in achieving both of those. I did not get to have all the spiritual conversations that I imagined having, as most people spoke Bengali or English that was hard to understand, and the conversation at the International Guest House was mostly light conversation. I thought I would get to talk to the president of the order, but when I went to see him, they sent in five people at a time, and all we could do was make our pranams and leave. I found out later that I would have had to make a special appointment to talk with him.
Seeing the holy sites and the devotees, and meeting swamis and nuns, is something I will remember for the rest of my life. The Swami at the Baranagore Math was insistent that I should come back again, and he tried to teach me that phrase in Bengali. I don’t know if I will make it back again, but this was the trip of a lifetime.
(The photo accompanying this post is a statue of Swamiji, which I believe was taken outside his ancestral home.)
www.vedantaprov.org