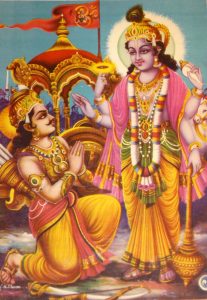 Bhagavad Gita, etymologically means the “the Song of the Divine”, is a paraphrase of a dialogue between Arjuna and Sri Krishna who is considered to be an incarnation of God. Vyasa, the author of Gita, composed it in 700 verses and it is a part of the epic Mahabharata spanning 18 chapters. Gita primarily deals with the Reality that is the basis of the cosmological and psychological phenomena perceived by an individual along with their interconnections, the characteristics of a person who has realized the Reality, how a person ignorant of Reality and caught in this phenomena of objects and sensual experiences could gradually be freed of ignorance through various methods.

The setting in which Bhagavad Gita was delivered to Arjuna is staggering – it was in a battlefield! In Mahabharata, two groups of cousins, Pandavas and Kauravas, after failed attempts of reconciliation over division of a kingdom, declare war against each other. In the battlefield of Kurukshetra, Arjuna (one of the Pandavas), sees that he has to fight with his near and dear close relatives, friends and revered teachers in Kauravas. The possibility of he being a cause of death and disaster ones makes Arjuna very despondent and mentally weak. He implores Sri Krishna (his charioteer and a God-incarnate), invoking various pacifist specious arguments of why the war should not happen and finally declaring that he would not fight the war. Sri Krishna, clearly saw through the confusion that Arjuna was muddled in, took upon the role of a guide and roused him up calling upon Arjuna to be fearless and mentally strong. When Arjuna takes refuge under tutelage of Sri Krishna, then Sri Krishna begins a proper discourse.

The symbolism presented in this setting could not have been any more dramatic: the choice of performing one’s duty, in this case waging a war, over one’s attachments to one’s own family/friends is overwhelming. The moments of dejection, despair and doubts that beset Arjuna in his fight would befall upon us too in our progress towards the Highest goal.  And Arjuna, as exemplary as he was, has shown us the path too: to take refuge in God or in other words practice what Sri Krishna advised him to do.

And so the Bhagavad Gita unfolds with Sri Krishna guiding Arjuna wading through his doubts and questions. Each of the 18 chapters of Bhagavad Gita are termed as “yoga” i.e. a technique that can be practiced to reach the goal of God-realization. At the conclusion of each chapter, the name of the specific yoga technique described in that chapter is mentioned along with addressing Bhagavad Gita as an Upanishad. Although, Bhagavad Gita is not an Upanishad, but all its verses are an elaboration of what has been given in various Upanishads comprehensible for modern people, thus making it more relevant than Upanishads for the current society.

The following are the names of the 18 chapters of Bhagavad Gita along with some important verses (free translation) contained in each: